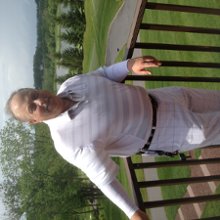 ​The most helpful tips for your short game

1. Less loft for the upslope
An upslope around the green adds loft to the club so leave the wedge in the bag and use an 8- or 9-iron. It’s easier to control the distance that the ball will travel through the air.
Position your spine at right-angles to the slope, with your shoulders and knees parallel to the gradient.
Don’t lean into the slope. Keep your weight on the lower foot and then follow through from impact to a high finish.
2. Belly the wedge
With so many courses so well manicured, chances are the greenkeeper will keep the semi-rough around the fringe defined.
Getting a putter behind the ball is difficult. As such, take a putting grip using the heaviest club in your bag – the sand wedge as some professionals do on the Evian Ladies European Tour.
Position the ball in the center of your stance and hover the leading edge of the wedge over the grass. With a low, slow backswing, strike the ball at its equator and watch it roll like a putt.
3. Soft hands for finesse shots
Around the green, we get so determined to achieve length and direction that we often tense our bodies. Try to relieve that tension by gripping the club lightly with 'soft hands.’
When being asked about the best tip that he could offer golfers, Bernhard Langer says that would be to concentrate on grip pressure, which means a light touch for finesse shots. Imagine you are merely tossing the ball on to the green with an under-hand throwing action.
4. In the groove
For shots around the green, remove mud and debris from your grooves to make better contact with the golf ball from the clubface and obtain a little check spin.
You can buy special tools to clean the grooves. Alternatively, you can use the sharp end of your tee to get rid of anything stuck on the club face.
An increase in spin will give you better control around the greens. It is crucial in developing a solid chipping game.
5. Flag up your wedges
Most of us have, at least once, lost or left behind a wedge after chipping on to the green and leaving it where we played our last shot.
To prevent that from happening again, before putting out, lay your wedge on or beside the flagstick when it’s removed from the hole. As such, you can’t avoid picking it up before replacing the flagstick.
see more: https://topgolfgears.com/topics/golf-drivers